List of Advertising Slogans and Taglines(or mottos) for Wienerschnitzel 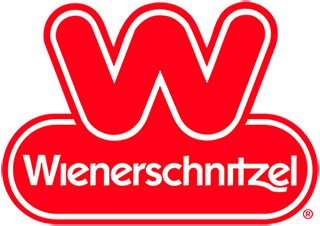 The World's Most Wanted Wiener (1999-2005 as main slogan, now used only in The Delicious One commercials)

Wienerschnitzel is an American fast food chain founded in 1961 (as "Der Wienerschnitzel") that specializes in hot dogs, also known as the World's Largest Hot Dog Chain.

A slogan is a memorable motto or phrase used in a clan, political, commercial, religious, and other context as a repetitive expression of an idea or purpose, with the goal of persuading members of the public or a more defined target group.
Pre：Yoshinoya
Next：Golden Corral