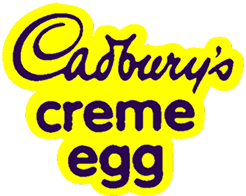 The first television campaign to use the "How Do You Eat Yours?" theme, featuring the zodiac signs. (1990–1993 United Kingdom)

Spitting Image characters continued "How Do You Eat Yours?" (1994–1996 United Kingdom)

A Cadbury Creme Egg is a chocolate confection produced in the shape of an egg, originating from the British chocolatier, Cadbury's.

Related Famous Taglines:
A slogan is a memorable motto or phrase used in a clan, political, commercial, religious, and other context as a repetitive expression of an idea or purpose, with the goal of persuading members of the public or a more defined target group.
Pre：Planters
Next：Goldfish (cracker)